Oh, my!  This was such an amazingly fun photo shoot!  Photographer Renee Keith is so absolutely wonderful! 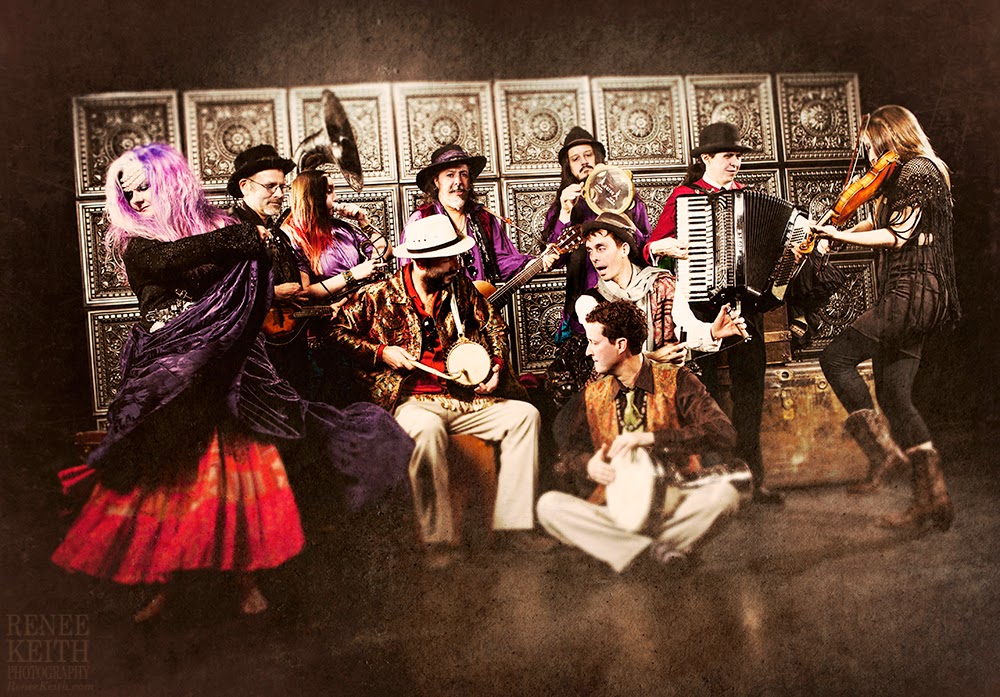 What an amazing autumn we have been having!  We have played so many great shows and met so many wonderful people.  We can't wait for more!

Our last show for a while, at least until January 10 (oh, there's some big news there!), is going to be this Friday night, November 7, at Bar Deluxe.  We have the amazing honor to open for Rajasthani Gypsy Caravan who are currently on a US tour from India.  This is going to be such an amazing night! Posted by Unknown at 2:17 PM No comments:

Excellence in the Community

Excellence in the Community featuring Juana Ghani will take place at the Gallivan Center located at 239 S. Main Street in downtown Salt Lake City on Thursday, August 21st. This family friendly event begins at 7:30pm and is free to the public.
Posted by Leisl at 9:44 AM No comments:

The Story Behind the Song - RAISE YOUR GLASS


When Brian was a very young guitar player, he found himself in a band with a group of other young musicians who very quickly became very good friends.  The kind of friends that become brothers.  They were constantly together.  They were there for each other throughout all the excesses of their youth, good and bad.  Even after Brian left the band to move to Los Angeles in pursuit of bigger dreams, they were there, cheering him all the way.  When he returned, they welcomed him back with open arms.  But something undefinable had changed.

Years later, after they had all settled into life with families of their own, the friendship was still there, but they were never really as close as they had been.  It was as if secrets were being kept.  Still, they kept in touch with each other through regular phone calls and lunch get-togethers.  Then one day, as Brian was sitting down with the family for dinner, some music came drifting in the window from across the neighborhood.  Not just any music.  HIS music.  Songs he had written all those years ago were dancing along the breeze blowing through the windows of his home.  These friends of his – these men who had been such a large part of his life for decades – were playing his music without him at a party in his own neighborhood he was not invited to attend.  They were playing his music and passing it off as their own with no guilt, no shame, no explanation, and no apology.  They had betrayed his friendship and stolen his creation.

This is the betrayal of Raise Your Glass.  Brian is the master, the song is the servant, those “friends” are the beast.

So off they went
Servant and beast
Along their merry way, yeah
They had the food
They had the song
Fi diddly dee da die-o

Labels: betrayal, Raise Your Glass, Shall We Live Forever, Story Behind the Song

Story Behind the Song – KASOJENI BAY


One afternoon, several years ago, as I was driving to the grocery store to do my weekly shopping, I saw a lady walking along the sidewalk next to the road.  She was wearing a floral print full-length cotton dress – obviously homemade – and a little white cotton bonnet on her head with a matching bib apron tied around her neck and waist.   On her feet, she was wearing what looked to be wooden clogs.  She was so odd and so beautiful and so out of place – like a Rembrandt portrait come to life in a John Baeder painting - that it was all I could do to concentrate on driving.  Once I made it home, I immediately texted Brian about her.  He, of course, told me to write it down.  (He’s always telling me to write these things down.)


It was around this same time that Brian came down with a nasty case of the flu.  He shook me awake in the middle of a fever-filled night to demand that I find my bedside notebook and write down the name “Kasojeni Bay.”  No explanation … just the demand.  So I did.  I assumed it was a dream he’d had.  In a way, I guess it was, but he didn’t remember anything the next day other than the name of this place.  We spent weeks on the internet trying to search for a place by that name, only to keep coming up with nothing.   (My dad is still trying to find this place, so if anybody knows where it is, please let us know.)

Weeks later, on a late Sunday afternoon, Brian and I had been working in the studio on some other songs.  We came upstairs for a drink and to clear our heads for a moment, only to find that the only “adult beverage” we had in the house was a half bottle of Absinthe.  Being a Sunday in Utah, the liquor store was closed.  So, yes, we did a straight shot of Absinthe before heading back into the studio as we joked about shooting Absinthe because the vodka was all gone.

This was when the story of Kasojeni Bay started to come together into a song.  We’d envisioned it telling the tales of a group of people so happy and comfortable in their insanity that they don’t notice they are insane, nor do they care.  Sometimes, living in a fantasy world is a much better – in some cases, maybe even healthier – place than the ugliness of certain “real” world situations.

Once the song was written, we decided we wanted to have a few key phrases translated into and sung in a different language.  We’d flirted with a few different language options, but ultimately decided on Slovene.  Luckily, our good friend Jeremy Young speaks Slovene and kindly did the translations for us, even driving up to our house to teach me how pronounce the words and what each phrase means.  Then he accused me (jokingly … I hope) of singing Slovene with an Italian accent.

But the song itself wasn't enough to tell the story of this place called Kasojeni Bay.  While we were in the studio recording our album Shall We Live Forever, Brian was spending his mornings busily writing a book.  It wasn't his original intention.  He just got a little carried away by one of those "Tell me how we met, but don't tell the truth about it" posts on Facebook.  In a way, I guess we can blame Hillary LaFrance for starting him down that path.  What started out to be a simple, silly paragraph quickly became an insistence by the characters in this book for him to tell their story.  It was occupying his dreams, waking him up in the middle of the night, demanding to be written.  This book, Kasojeni Bay, weaves many of the stories of the songs on this album into a complete tale of discovery and what is truly important in life.

In her mind, another time
Shufflin’ down the street
Cotton bonnet on her head
Wood clogs upon her feet
She never said, “Hello,” to me
Nor even yet, “Goodbye”
She never said a word to me
Just looked at me and sighed
Nikoli mi je rekla "Zdravo"
Pač tudi ni "Zbogom" 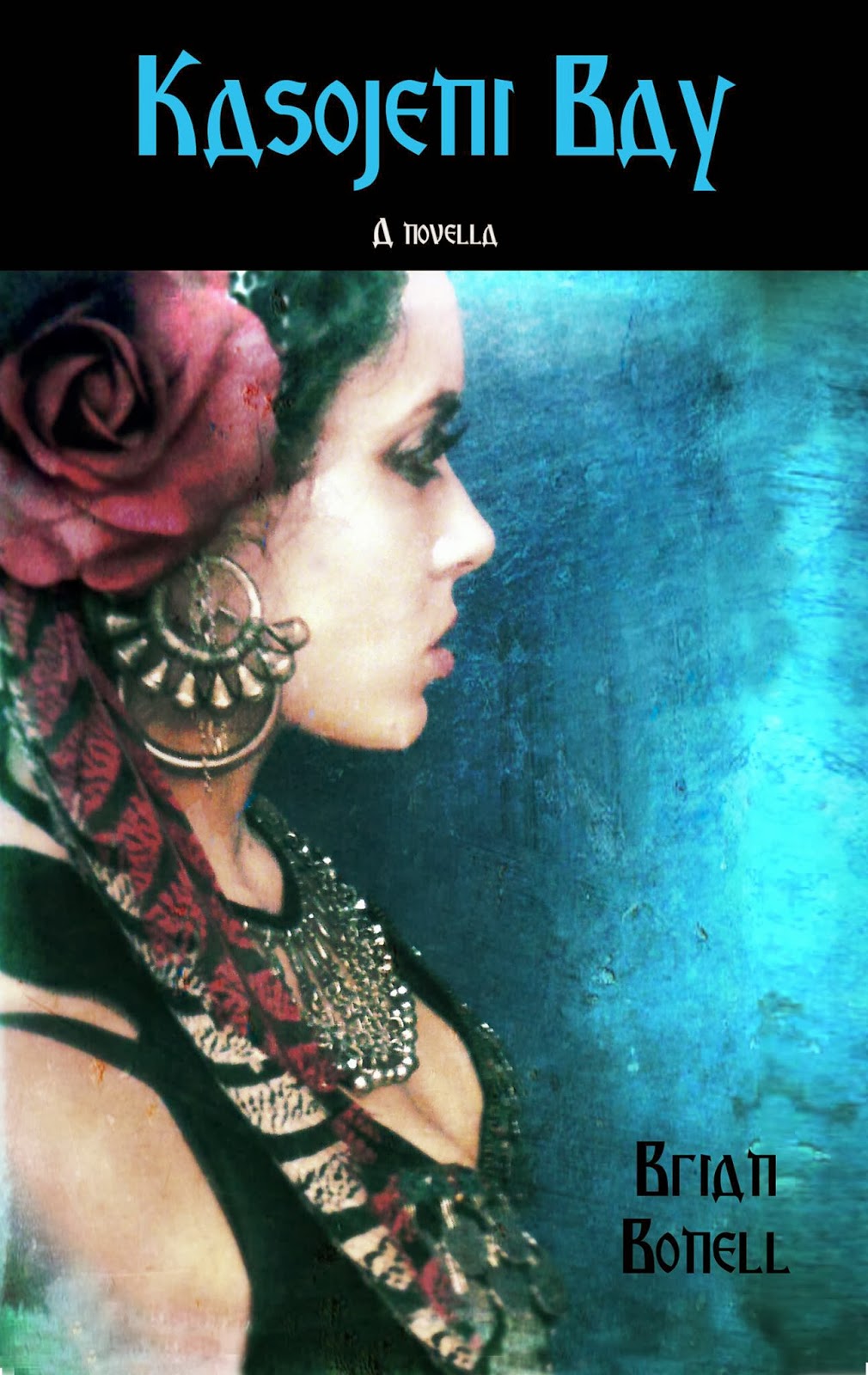 Labels: book, Kasojeni Bay, Shall We Live Forever, Story Behind the Song

JUANA GHANI and THE HIGHWAY THIEVES to appear at Kamikaze’s March 29, 2014

Ogden, Utah –  Bands Juana Ghani and The HighwayThieves will perform together for the first time at Kamikaze’s (2404 Adams Ave.) in Ogden on Saturday, March 29, 2014.   With a total of 17 musicians between the two bands and a bevy of the best Gypsy belly dancers around, the night promises to be filled with a contagiously entertaining Gypsy punk madness and mayhem.

Ogden’s very own The Highway Thieves (http://www.reverbnation.com/thehighwaythieves) embrace their whiskey driven folk rock and offer no apologies.  With original songs full of rebellion, “in your face” honesty, and a sense of humor, they never fail to bring the audience to their feet and leave them screaming for more.

Eclectic Gypsy punks Juana Ghani (www.juanaghani.com) are known for their always titillating live shows and songs that are full of “semi-nightmarish fantasies of violence, revenge, desire and struggle” (Savannah Turk, City Weekly) and music that is “full of love, death, sex, grief, passion and vodka.”(Oliver Arditi, LiveUnsigned) Their live shows not only bring fabulously infectious original music, but often include the area’s most amazing belly dancers and performance artists. 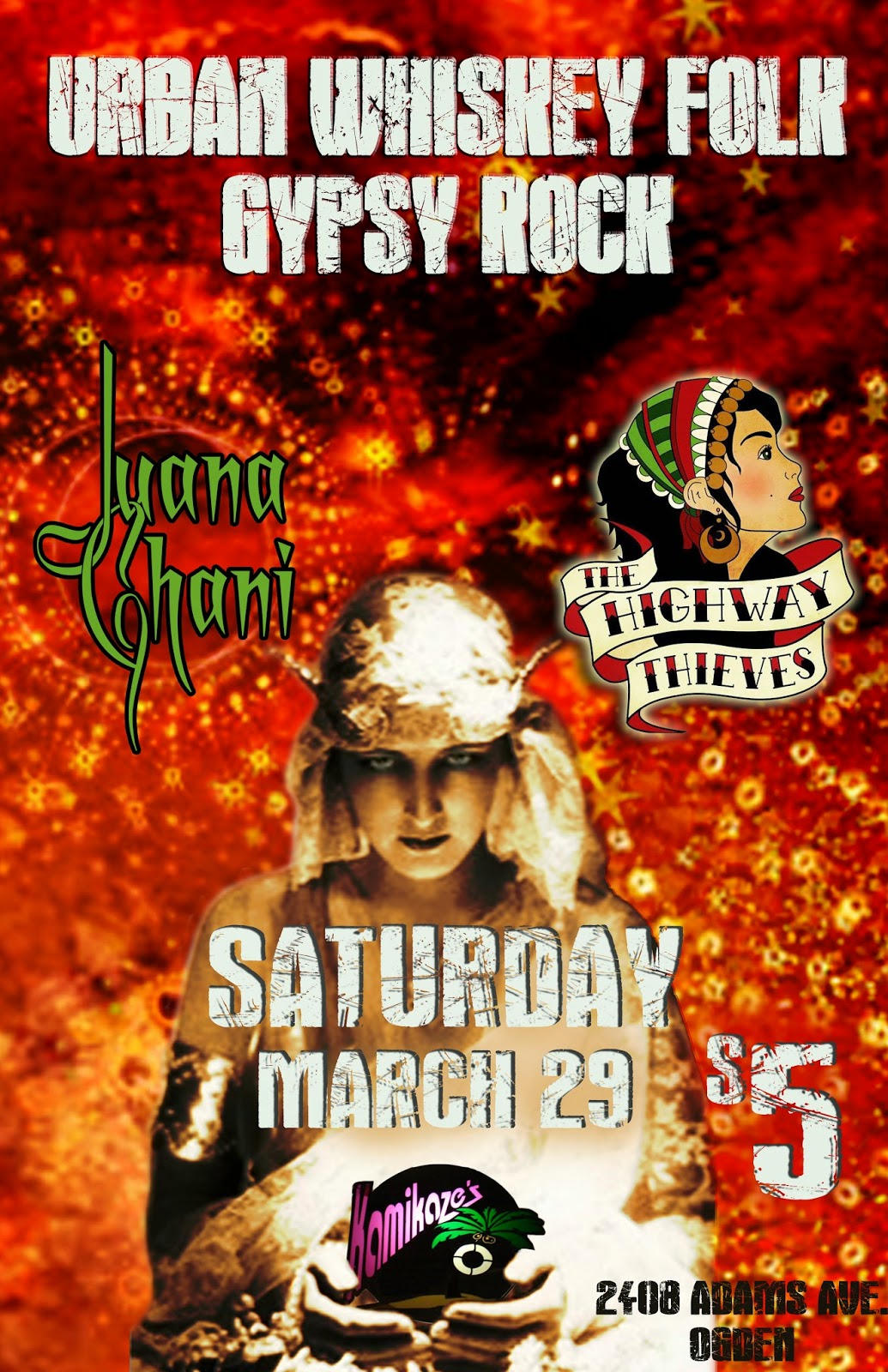